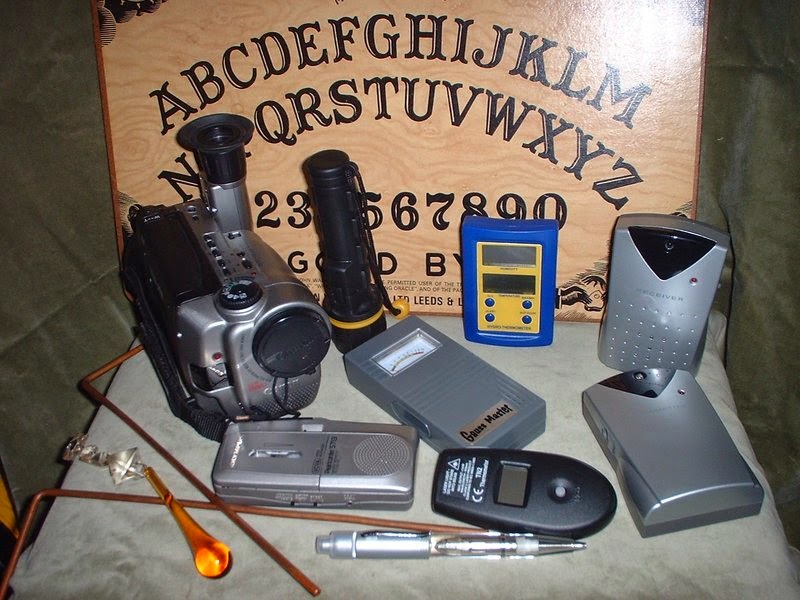 Jim was a Ghost Hunter in Northern California. Most of his Friday night's he would spend with his his friends,  toting electronic gadgets and going through haunted homes. Jim's paranormal team even setup a web channel where people could login and watch a paranormal team do an investigation. Jim was having the time of his life. Ghost hunting was thrilling and exciting.

One day an exciting case came in. They were invited to a house with demonic activity. They packed up their gear and off they went to the house they called, “the Hell Gate”.

Over the next few months Jim became violently sick, and something medically inexplicable was eating away at Jim from the inside out. Literally. Jim was afraid to go to sleep at night because a dark shadow would manifest over over his bed.

Jim's friends from his ghost hunting team were paranormal-ly perplexed. In reality, Jim's paranormal investigator friends weren't the great intellects of the paranormal as the TV shows portray these people to be. In fact, they didn't really contact Jim because they didn't know what to do with him. Now on Friday nights, Jim's posse~ went off on different haunted web productions -without him.

Jim was frustrated! So he did what any good paranormal investigator would do, he contacted a psychic. Jim consulted a top psychic-spiritualist over the phone.  She told Jim that the house he got the evil spirit from was on desecrated Indian ground. The demon attacking Jim was now communicating with the psychic and feeding her disinformation. If demons laugh, you know this was one chuckling out loud. Because now the psychic had Jim off on a wild goose chase petitioning the California Indian council for a cleansing ceremony on his home. Jim was frustrated that the council didn't return his calls.

Nobody returned Jim's calls except for the psychic. As Jim's condition worsened he decided the spiritualists and ghost hunter's around him were useless. Jim reached out and contacted a Christian ministry, M16.

It took numerous and long drawn out phone calls on our part to convince Jim he didn't need to contact the California Indian council for a cleansing. It was Jim that needed the spiritual cleansing. We had even a tougher time of breaking Jim from his psychic dependency. He would tell the ministry he wasn't in contact with his psychic, then in a lengthy phone call, have a slip of the tongue he was talking with her. So we stopped working with Jim. He had to choose, Jesus or the psychic.

A week later Jim called us back and decided to work with us. It took over a month to work with Jim. He, like most other people coming out of paranormal situations, didn't want to run to Jesus. They just want to be saved from their pain and move on in life. That's not how Jesus works. Jesus is a healer, but he wants to make you whole. This means you need to run to him. After a long and painstaking battle, Jim finally accepted Jesus. By battle, I don't mean between my spiritual views and his. Jim was struggling because Jesus was kicking this thing's butt! Only, the life style he was involved in, and hanging around paranormal investigators, Jesus was a myth. Jim had a lot of internal struggles and battles and lots of phone calls with Lisa and myself. He was perplexed that this Jesus person, had the power to push back on the realm of darkness. Jim's life turned around when he stopped being a spiritualist and started being a spiritual follower of  Jesus.

Spiritualism has its roots in American history that dates back to the 1840's. In upstate New York, Christian revivals were so impacted in the area and so many occurring, the area was labeled the “Burned-over district”. One Christian revival after another swept through this region. Revivals literally “burned” through towns like wild fires. People were spiritually hungry for the power the revivals brought to their town. But as the revivals left town, nothing was left to spiritually feed the people that had powerful Jesus encounters. The revivals left a vacuum of the power of the Holy Spirit when they pulled up their stakes and departed.  The vacuum became filled by cults and non-Christian beliefs bringing their own revivals.

Upstate New York spawned many cults during this revival burn over period. Joseph Smith founded Mormonism in this region. The Book of Mormon was reportedly unearthed in a hillside in Palmyra, New York.

In the 1840's the Fox sisters, of Hydesville, New York,  founded the new religion, spiritualism.  After living in a haunted home, the youngest of the three sisters communicated with a spirit by having the spirit tap out yes or no to her questions. The three sisters became the first of what we now know as modern day mediums. The new religion spread like wild fire, through upstate New York, and soon the country was on fire with spiritualism. The religion was based on the belief that human souls could wander the earth as ghosts and you could communicate with them. It's interesting to see how the enemy re-invents old things and packages them up like something brand new. Spiritualism is still necromancy!

At the time of this writing, nearly every major cable network has some sort of ghost hunting or paranormal show. I was surprised to find that even Animal Planet has a paranormal show. All the ghost hunting shows you see on television and the Internet today are spiritualism based. They all employ the belief systems and methods for communicating with the dead, that the Fox sisters introduced in the 1840s. The television show, on the SyFy network, Ghost Hunters, you see the team members using this knocking technique developed by Kate Fox to communicate with the dead. Investigator Steve Gonsalves, on Ghost Hunters, uses his “Shave and a haircut” knock all the time on the show to drum up spirit response. This communication by knocking is what Kate Fox and her two sisters used in the 1840's when they started the religion. Mediums existed long before the Fox sisters came long. However, the Fox sisters were responsible for the modern movement of spiritualism.

Although the Fox sisters all passed away in the late the 1800s, their legacy lives on. It is thriving at the Lily Dale Assembly. Lily Dale is a spiritualist community comprised of mediums, located in Lily Dale, New York. The assembly is the existing church of spiritualism founded by the Fox sisters in the 1840s. Lily Dale is still flourishing today. You can go out there and pay a gate fee, only good for 24 hours to visit the community.

Before we discuss whether a Christian should be involved in ghost hunting, let's first take a look at some scriptural facts on ghosts and spiritualism. First of all, the scripture prohibits us from engaging in any form of contact with ghosts. Regardless if they're departed human souls or evil spirits.


‘Give no regard to mediums and familiar spirits; do not seek after them, to be defiled by them: I am the LORD your God.  (Leviticus 19:31)


A medium is a psychic. Psychics communicate with the dead. Communicating with the dead is necromancy. Scripture says that to seek the consultation of a medium is to be defiled by them. Why? Remember our friend Jim who was receiving the counter attacks through disinformation from his medium? Mediums are in contact with demons. Plain and simple.


There it is, in black and white, in Deteuronomy 18, verse 11,  being a medium is an abomination to God. It is an abomination because it is a counterfeit prophetic gift, what a deliverance minister would call a Jezebel spirit. God has prophets and seers that listen to his word. A medium listens to demons. Bringing the belief into the church that ghost hunting is okay is defilement of God's word. This is the movement of a Jezebel spirit, a counter prophetic spirit, and it needs to be shut down in the church body.

Uncertain of Their Own Faith in Eternity


The most compelling reason Christians get involved in ghost hunting and paranormal investigations is because they believe they are providing proof of the after-life. The problem is the proof they are seeking is spiritualism truth. Which is a lie from the father of lies. For one, Jesus chastised the Pharisees for demanding to see miracles. This is where the Christian ghost hunter is with their faith. The  ghost hunter requires to see miracles, which in the case of ghost hunting, are from the enemy.  Yes, it is proof of existence of the supernatural, but the spiritualist is so convoluted in lies they can't see the spirit is a demon. Furthermore, involvement in these activities brings curses, like the attachment of an evil spirit like our friend Jim had. The lure of chasing the supernatural also brings uncontrollable obsessions as well.

In Part II of this series, we'll take a look at what the Bible says about dead spirits.

For further reading on the topic of spiritual warfare get your copy of,
A Field Guide to Spiritual Warfare - the Power to PULL the IMPOSSIBLE from the HEAVENLY REALMS