Paranormal Exorcist and Seal of Solomon

It seems like paranormal television shows never cease to deliver this season. Again, watching the Scooby gang on Ghosts of Shepherdstown, season 2, episode 8, titled "What an Excellent Day for an Exorcism,"  the viewing audience was treated to another paranormal demonic expulsion. The minister Nick Groff and the gang brought in was introduced as an ordained Catholic minister and exorcist. Again, listen carefully to scripting in these paranormal shows, there are always red flags. Here I want you to pay attention to the guest ordained Catholic minister and exorcist. An ordained minister is a layman minister and not clergy. Catholics don't allow laymen to be an exorcist. The office of exorcism is for clergy only and the assignment is handed down by a Cardinal or someone high up. A Catholic layman can be a deliverance minister but not an exorcist!

The plot thickens as the episode unfolds, where Nick brought in this "exorcist" to expel a demon (by the way this is never singular, demons travel with buddies) from the Ye Old Myst Tea House in Shepherdstown. The exorcist enters with the black clergy looking outfit, no collar (not clergy) and is wearing a cross around his neck. So far, okay. No big deal. The minister is led into the tea shop which is a war zone with debris scattered all over by the floor. I am curious what this exorcist is going to do since he was is forbidden to use the Rite of Exorcism (he wasn't approved by the Catholic church). I was pontificating that perhaps the audience was going to see a deliverance ministry session since by Catholic faith he couldn't use the Rite. I am also curious as to why the show didn't reach out to the Catholic diocese for a real exorcist in the first place! Credibility for this show is not a high point with
me.

The exorcist prepares for battle by drawing in chalk on the floor, the star of David and enclosing it in a circle. 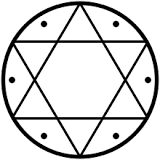 Wait a minute. What? This resembled a ritual pentagram drawn in chalk, but it was the star of David.  This symbol is the seal of Solomon, a secret society occult symbol.  Its called a hexagram and is used in witchcraft and Freemason rituals. Wasn't this guy supposed to be a Catholic minister?? Baffled? Why would a Catholic minister use the occult to protect him from demons? Then this minister proceeds with a ritual in Hebrew that calls Yahweh and Y'shua (Jesus). No Catholic liturgies or anything. No I am intrigued as to what the heck I am watching. It's not Christian that's for sure! 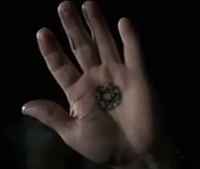 The minister then rubber stamps the seal of Solomon on the Scooby gang. Which now includes the show psychic. Any Christian spiritual warfare minister worth their grain of salt (no pun intended) would ever bring a psychic to demon fight. Another red flag! This is the occult folks!!!

Then there is the dramatic moment in the show, with the minister shouting, "I command you in the name of Yahweh God, to bring yourself into the seal of Solomon." Again? What?? This isn't Old or New Testament spiritual warfare. This is New Age Jewish mysticism. A true Christian minister would have bound the spirits in the name of Jesus Christ (if these were low-level demons). In the case of what the show portrayed, they needed a real exorcist. Demons are expelled from a different prayer posture. What ensues next is the Scooby gang gets thrown a good ol fashion Sons Scheva beat down. The demon doesn't even go full force, it freaks them out with false fevers, nausea, and onslaught of the single tiny spider.

During this spiritual battle the "exorcist" never relied on his faith to expel the demon. He was stirctly adhering to occult formulas. Which any Christian deliverance minister knows is in effective against demons. Again, refer to the book of Acts and the Sons of Scheva who were thrown a beating by demons they were trying to expel. What do demons fear? Demons fear a person of faith because they have the spiritual depth and relationship with the reality of Jesus Christ to expel dark spirits. A powerful minister is a person whose soul is in a transforming union with Jesus Christ. A strong soul in Christ is kryptonite to demons and they won't follow these kinds of souls home!

Now back to wackiness at the tea shop. The minister has the Scooby gang renounce all ceremonies of satan. What did this guy just perfom? The seal of Solomon is the occult! Yes, this presentation of spiritual warfare was an atrocity. I am curious where this individual is ordained and which Catholic parish allows this minister to operate in this manner. It's not Christian, it's New Age. I am guessing he must be a universalist minister. But then again, what should I expect from a paranormal show.

Wasn't Shepherdstown cleansed by the psychic minister previously? If I remember correctly from season one, didn't the show psychic break the curse over Shepherdstown. Oh, yah. We're not supposed to be paying attention. The show concluded with everyone happy and that the site was cleansed. This is exactly the scene from the Poltergeist movie, "This house is clean!'. It's not, no one in the cleansing party was there with the faith to expel these demons. They demons went out for re-enforcements! I guess that's what we'll see in season 3.

In closing, if you're Christian and thinking you're an exorcist or a deliverance minister for the paranormal, you need to go pray and re-think your position in the greater plan of things. People viewing these shows and replicating these occult practices will get hurt. I can guarantee your lives will be destroyed. This is something you don't mess with at all! That's why the Catholics don't let layman be exorcists. A spiritual attachment is something you never want on you or your home. Those of us who have been brought into a spiritual fight by God DON'T live in oppression like these ghost hunters do. Go look on youtube and see for yourself the spirits that torment all these paranormal celebrities. These things are real and they bite back.

Well, that's enough for now. Hope this was beneficial.
Blessings


Get your very own copy of A Field Guide to Spiritual Warfare!

A Field Guide to Spiritual Warfare - the Power to PULL the IMPOSSIBLE from the HEAVENLY REALMS
Posted by Michael Norton at 9:26 AM