The Paranormal and the False Trinity 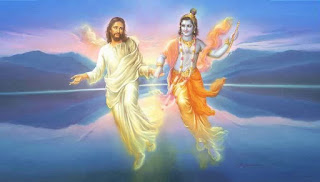 Some of the shows out this summer include The Ghosts of Shepherdstown, with Nick Groff, of Ghost Adventures fame, and the new comer paranormal show, The Lowe Files, which is a small, ineffective rip off of Destination Truth, featuring Rob Lowe, and his two grown sons.

I arm chair quarterback these shows to see what is all the rage in paranormal investigations. One of the new trends is for the psychics on these shows to portray biblical knowledge of spiritual warfare in one scene, and then immediately in the next scene, call on the occult to engage the demonic. In both, The Ghosts of Shepherdstown, and The Lowe Files, psychics were on hand who called upon the Holy Trinity for protection. Yes, a psychic, in Ghosts of Shepherdstown, and a shaman, in The Lowe Files, called on the Holy Trinity to protect them. What is going on here? Why is the Holy Trinity called to push back on the demonic presence, but not used to expel the demons at the site?

Examples from recent shows:
The Ghosts of Shepherdstown - S02E03 Whatever You Do, Don't Fall Asleep
Psychic - "If you're not of the Father, the Son, and the Holy Ghost, you're not welcome here.


The psychic in this show that calls on the Holy Trinity, doesn't call on the true God for banishing but resorts to using black salt.

The Lowe Files - S01E01 - Preston Castle
This is a scene where the shaman and the Lowe's go outside for healing the land. The shaman starts doing a native American ritual and the spirit box requests Bible. The shaman laughs, like it's an absurd request, and starts a Christian (new age) healing of the land.

Shaman - the name of the Father, the Son, and the Holy Spirit, ... come here today to pray for these souls. Want them to be cleaned, cleansed, redeemed, forgiven, healed, and allowed to move on. The next world, as free souls. Come with your light in the name of Jesus, in the name of the angels, rest in peace. Once and for all. Amen.


Christians who don't understand the occult would be deceived into believing the psychics on these shows are calling on the true resurrected Jesus. This is not what is happening here. This is New Age spiritism that is being displayed on these shows that are slowly moving into darker waters of the occult.

When a psychic calls on the name of Jesus in these shows it is demonstrating the deception that the Triune God is ok with contacting the dead. The truth of the matter is, God is not ok with this. We know from scripture, 1 Chronicles 10:13, that Saul's transgression against God was summoning the spirit of Samuel from the realm of paradise, through a psychic medium.

13 Saul died because he was unfaithful to the Lord; he did not keep the word of the Lord and even consulted a medium for guidance,

These paranormal show psychics claim that God and the Holy Spirit is their method of discernment. God doesn't want His people contacting the dead, He doesn't give out this gift. Psychics erroneously quote 1st Corinthians. The gift of discernment has nothing to do with talking to the dead. Talking to the dead is declared in the Holy Scripture as being occult practices, in Deuteronomy 18:9-13.

9 When you enter the land the Lord your God is giving you, do not learn to imitate the detestable ways of the nations there. 10 Let no one be found among you who sacrifices their son or daughter in the fire, who practices divination or sorcery, interprets omens, engages in witchcraft, 11 or casts spells, or who is a medium or spiritist or who consults the dead. 12 Anyone who does these things is detestable to the Lord; because of these same detestable practices the Lord your God will drive out those nations before you. 13 You must be blameless before the Lord your God.

A psychic does have a gift of discernment, the Holy Spirit was poured out on all of us. What is going on with the psychic is that their spiritual gifts have been hijacked by the demonic. They've been spiritually hacked so to speak. And with this they listen to the lies of the demons about this being okay with God.

When we see a psychic in Scripture, in Acts 16:16, she was a fortune teller, whose powers were identified by the Apostle Paul as being a Python spirit. He cast the demon out of her. I want to paint a picture here that God does not accept his kids to be messing with the occult. Where these psychics are dabbling in Christianity is in Universalist churches where the concept, of paganism, Christianity, and all religions exist as the same God. This is a lie and a deception. Universalism is a New Age church where the false Trinity exists. It also exists in Satanic rituals. Satan has his own second heaven, he has his false (anti-) Chirst, he is the false father, and there is a false Holy Spirit. I learned first hand in my ministry with helping survivors of the occult, the levels of deception that are involved in convincing people that God doesn't exist.

The next time you see a psychic on a paranormal show calling out to the Holy Trinity, be aware that this is not the Christian Trinity. This is a false trinity. And when the psychic drives out a demon in these shows, it is replaced by a higher food chain demon. Remember, Jesus told us about a house divided. Satan doesn't cast out Satan; he leaves a higher spirit behind. Sure the place was cleansed of the first demon(s), but now there is a bigger problem.

As a word to the wise, no Christian should be involved in the paranormal or ghost hunting. If you're seeking proof of the after life, you need to work on your soul's sanctification. As you go deeper with Jesus, you will not need to seek out these worldly things. God will provide your heart with the certitude of his actuality. Seek His presence through prayer and avoid this ghost hunting garbage.

By the way, the following are methods of divination and should be avoided completely by Christians:

Posted by Michael Norton at 3:29 PM