Commenting on the GA Possession in Ogden Episode 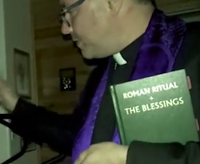 Ghost Adventures is my constant go to now presenting commentary on how the paranormal deals with cases of possession. These paranormal shows tend to raise more questions than answers. And I am not talking about the paranormal they present in the show, I am referring to the 'what the heck are they doing?', moments, in these shows. Season 15, episode 2, of the show is titled The Ogden Possession. Where  Zak and the Scooby gang go to a residence near Ogden, Utah to assist the Lyons, family (David, wife Jen, daughter Jessie, younger daughter Gwen, 15 years old, and the young son Junior).

In the opening scenes, the wife Jen, proceeds to describe, what sounds like to me, as a minister that deals with this stuff, a familiar spirit on the verge of demonic possession. The familiar spirit (a demon) will in the early stages of possession befriend the targeted soul. The spirit will only appear to the individual so only they can see them. The spirit will constantly interact with the target soul to drive them to insanity. As the familiar spirit is doing this they are oppressing the soul and at the same time trying to isolate the soul, so the familiar spirit is their only friend. The demon will then try to form this weird bond with the soul where it wants to be in a relationship, or even marriage with the soul. The marriage is a stage of demonic possession, where the familiar spirit is only the low-level door man to a crew of numerous bigger demons. The familiar spirit is actually the grunt spirit in this situation that is on a chain to the bigger ones not in the picture. In this episode, the Scooby gang kept thinking the familiar spirit was hiding in David's bedroom closet. When in actuality, it was the bigger demons residing in there waiting for demonic possession. Weird, yes? But that's how it goes down.
Now during the first interview between David and Zak, we see Zak get this weird sensation in his head. Zak asks David about the familiar spirit. Demons don't like to be found out. What Zak is experiencing is what I call an occult headache. These are nasty, sharp, intense pains, and can inhibit movement in your neck. They're extremely intense and sudden. Zak describes it as a 'really bad pressure' in his head. But watching him, you can see he has a hard time turning his neck when this occurs. When you're in it this deep, you should be experienced in what to do with occult spiritual attacks. This is something you don't learn from seminary or books. I don't think there is any Christian book out there that describes attacks at this level. During this time of the interview, David's teenage son, Junior, gets hit hard with demonic oppression bringing a halt to the interview. These scenarios are the demonic spirits running interference to prevent from being revealed. They want to stay hidden.

A key thing about this interview from the interview David thinks his situation is hopeless. The state of hopelessness is a sign, in cases like this, of severe demonic oppression. During the interview, the spirit is appearing to David only and telling him to walk away. The spirit appears to David as a teenage girl and builds the false reality that she is a wayward deceased spirit looking for help. The spirit also consistently tells David to kill himself. Suicide is the message demons tend to banter non-stop during stages of possession.

We also find out in the show, the young 15-year old daughter Gwen, has a demonic spirit stand over her bed at night and gives her suicidal thoughts. The older daughter Jessie spent time in a hospital for the demonic chatter of suicidal thoughts that were overwhelming her in her bedroom. Jessie was able to see the demonic spirit in its true form - and not as a teenage girl.

It is from this whole interview session with the Lyons that Zak and the Scooby gang decide they're in over their head. Zak is moved and decides to bring in a team to handle the demonic activity. Good and bad. These paranormal teams never go to real teams for help. Zak goes to the paranormal Order of Exorcists. Note that these are not exorcists, The Order of Exorcists is a sham and is nothing to do with the Catholic church. In fact, much of the members involved in this are doing things that are an abomination to God. But the Order always seems to be the "go to" organization for Zak. Bishop Ryan is from the Holy Nicholean Catholic Church (which describes itself as a Catholic, but not Catholic church on its web site). Yes, another what the heck moment. With these Catholic church off shoots and the Order of Exorcists, everyone seems to be a bishop or archbishop - of their own church.

With this all set up, I want to jump into the commentary on the exorcism Fr. Ryan performed. Because there is a lot of weird stuff going on in this exorcism that doesn't reflect a minister who has done this before. The first tale-tail sign is when they give David the blessed drinking water. The blessed water forces the demons to reveal themselves through David. Nobody prays to bind the demons as they are manifesting. Seriously???

A demon is manifesting, and they don't take authority over it. Then Zak and Fr. Bryan let David get up and walk off unsupervised! Nobody is monitoring his behavior as he walks off alone. During a manifestation, a demon could be instructing David to kill himself. While the battle starts for the soul, Zak has the bright idea to do an investigation. Again, SERIOUSLY? A soul is being afflicted, and he decides to talk to the demons in the closet with his spirit box. At this pivotal point, the focus needs to be on David. When the exorcism resumes, they decide to do it with the lights out with night vision cameras. There are so many what the heck moments going on I want you to see a commentary on how this should have gone down.

When David returns, Zak has the scene set with night vision cams for the exorcism. Really???? Is this an exorcism or a seance? Why did Fr. Bryan allow Zak to dictate the conditions of the exorcism? Who is the spiritual authority here? The exorcism should have been scheduled during the day when people are well rested and not strained by the late hour. Also, because the entire family is afflicted by these demons, they should have been involved in the prayers of liberation. Furthermore, I wouldn't have allowed the demons to have home court advantage, and I would have moved the session to a "Real" Christian church. I need to say that because, Zak's radar is heavily bent to the new age, which is why we see all this goofy stuff on Ghost Adventures. In the church, I would have sat them in the pews with some prayer team members, and then proceed to read out loud curse breaking prayers for the liberation of the soul. When the demons manifest, the prayer team would take authority over them and bind them. Since these are occult spirits in this scenario, care should be made if there needs to be a distinction between the spirits manifesting as low-level demons or occult demons. There is spiritual protocol to follow for this. What I would expect to see, is that as mom and dad (David) got set free, the spiritual attachments would come off the kids as well. Or some work may need to be done individually with family members as to where they made their free-will bonds with the demonic in the house. We didn't see any forms of renunciation of the demonic spirits. The prayer session requires a team that knows spiritual authority and has an understanding of how to deal with a skirmish involving the occult. In the episode, we never saw Fr. Bryan take authority over the demonic. He just blessed and buried crosses on the property. Why couldn't he simply send the sister and Zac to bury the crosses and bless the home? Kill two demonic situations with one stone. This would have made more sense!

Furthermore, while Fr. Bryan and Zak were burying crosses in the yard, they left David unattended in the house. Again, I hate to use this word, over and over, but, SERIOUSLY??? So while the bishop is blessing the house, David stops breathing. GO FIGURE!!!!!! The demons are now in a clash with the prayer team and David's afflicted soul. The Bishop doesn't bind the demon that is keeping David from breathing! Bind the demon and order it in the name of Jesus Christ to release the respiratory system. David's eyes are also clenched closed, which is a sign of a demonic manifestation. I would have ordered David to open his eyes and then I would have bound the demon present and then expelled it. The sister commented later in the show, did you see the eyes? Yes! I saw the eyes very early on, and nobody did anything about it! When the eyes are clenched closed, or you see what appears to REM activity underneath the eyelids. A demon manifested and it doesn't want to be seen. 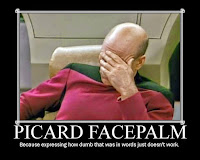 David then slaps himself, and the bishop says out loud that he may need to restrain him. Sorry, but again, SERIOUSLY??? Bind the demons using the hands and forbid them using any of David's body! In the midst of all this, the bishop feels its necessary to continue burying crosses on the property. David is manifesting and is in the clash with the demon. Are you getting the picture of this nonsense? These aren't trained or equipped exorcists!!!! I wish there were a Captain Picard face palm meme specially made for this episode!

I found it interesting how Aaron said the exorcism was difficult to watch. Yes, they are, which is why it takes a special team that can handle what is going on. Both before, during, and long after the exorcism. The demons weren't expelled from David. At this level of possession, David and his family, need to seek a Roman Catholic exorcist clergy, and counseling, for the long walk of healing out of this. This case was far out of jurisdiction for the Scooby gang the Order of Exorcists moose lodge.

If you have questions on curse breaking, or curse breaking prayers, I cover these in my book, A Field Guide to Spiritual Warfare.

If you have questions on dealing with manifestations, I cover these in my book, A Field Guide to Advanced Spiritual Warfare.

Get your copy today!  Available on Amazon in: