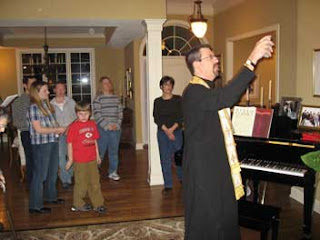 The media knows that the paranormal is a cash cow. Every channel you turn to now has some paranormal show. The shows are cheap to produce and guarantee viewer numbers. Ghost Hunters wasn't the first of these shows, but it certainly put the paranormal television shows on the map back in 2004. When the Ghost Hunters first aired, the internet was ablaze with amateurs trying to duplicate their efforts. Everyone on the internet was suddenly an expert in hauntings. Around the time Ryan Buell and Paranormal State debuted in 2007, paranormal television took a darker tone. The show was misleading in the fact that it led viewers to believe Ryan and Chip Coffee, the show resident psychic, were Roman Catholics. But the actions of what these people were doing on the show didn't add up. And they had a resident pagan on the team as an occult expert. The team would perform these weird rituals that sounded mildly Christian, but weren't, right before they would conduct a seance. It was in Paranormal State episodes where viewers were given front row seats to rituals on their family room television sets.

In 2008, Zak Bagans and the Ghost Adventure crew showed up on the Travel Channel. America watched the paranormal ghost hunting antics of Zak Bagans, Nick Groff, and Aaron Goodwin. Zak soon became the P.T. Barnum of the occult.  Nothing was sacred, and everything was presented haphazardly with no regard to the dangers of the occult. Zak and GA made for good paranormal show business. This show, and the Travel Channel's other paranormal show, The Dead Files, became the staples in leading people into the occult. I believe these two shows are what spiked the interest and popularity of modern voodoo. The rituals performed on Ghost Adventures are so dark, the episodes are absolutely unwatchable.This situation is now a critical issue in the spiritual health of America. These occult beliefs on the afterlife are now in the pews of American churches.

How should the church handle the paranormal? This is a multi-faceted question. How does your church handle spiritual warfare and the paranormal? The New Age has slipped into every church. Does your church have an understanding of what New Age beliefs have entered the church through parishioners or the pulpit? Pastors, are you aware of the duplicitous nature of your parishioners? Are you aware of those who go ghost hunting on Friday night and show up for duty on Sunday for your prayer ministry team? Are they doing Yoga or Reiki healing? These subtle practices are all New Age deception. Are they seeking psychics to contact the dead? Dabbling in paganism? This is stuff the church needs to get a handle on and correct if it is going to step in and deal with the occult. The church needs to equip her saints on what is spiritually dangerous. Many Americans in churches now believe there is more than one path to eternal life. The New Age and the occult are already in the pews.

Another major problem is that the occult offers the deception of revealing the truth to life after death. Do the members of your church body have a solid foundation in what lies ahead of them when their life ends here? What is their certainty of spending eternity with Jesus Christ?

What happens when you the pastor encounters the occult in your church? Do you understand the difference between low-level demonic deliverance and exorcism? Many Ph.D. seminaries taught pastors I have worked with thought that deliverance and exorcism are one in the same. They are not. Some peculiar theology surfaces in Mark 9:14-29, where a low-level demonic deliverance by the Apostles fails. When it comes to encounters with the occult, many pastors fall into this category of failure because they don't know the difference in warfare. Nor do they know the protocols necessary for different forms of warfare. The Western church has ignorantly built a false doctrine around deliverance practices that are based on being ministry success oriented rather than Biblical and scriptural. Let that one marinate in. Your whole library of spiritual warfare books could, in fact, be all useless.

Now one of my biggest peeves about paranormal shows is that they always feature a situation where the church failed. The church didn't fail, the pastor and the church were ill-equipped for the battle at hand. God created the spirit realm; He can put an end to ALL nasty warfare. NO BATTLE IS TOO BIG FOR JESUS!!!

A church stepping into battle simply can't do it blindly and follow the misleading books on the market. When you enter a house with occult activity, did you know you can't bind satan? Every deliverance minister I know thinks they can. Picking a fight with a satanic angel is ill-advised, there are huge, horrible repercussions of the ministers, and possibly ever the congregation.God never instructed us to battle satanic angels. The heavens belong to Jesus.

So what does a church do when it engages the occult to help someone? Again, there are protocols; they are presented in Mark 9:29 and Jude 8-10. Do you understand your prayer posture in warfare? When do you take authority and when do you petition Jesus?

If you are dealing with an occult situation, or demonic activity I strongly recommend you get equipped quickly and connect with ministers that are already involved in these battles. The biggest problem I have seen is that churches want to re-invent the wheel when it comes to spiritual warfare equipping. I don't know why this is, but its a common thread when our ministry reaches out to help churches.

Where does one start in equipping? I have written two books on these subject matters. A good starting point is A Field Guide to Spiritual Warfare. This is the beginning book that has something for everyone, I have been given excellent feedback that even seasoned deliverance ministers use this book consistently. Second, I have written a book for pastors, and counselors, who are dealing with these darker battles, this book is, A Field Guide to Advanced Spiritual Warfare. These books are well worth the investment in your ministry.

If you have any questions on how to deal with occult battles, please drop me a comment, and I will answer the question in blog posts.

If you have questions on curse breaking, or curse breaking prayers, I cover these in my book, A Field Guide to Spiritual Warfare.

If you have questions on dealing with manifestations, I cover these in my book, A Field Guide to Advanced Spiritual Warfare.

Get your copy today!  Available on Amazon in:


Get your very own copy of the ORIGINAL  - A Field Guide to Spiritual Warfare!