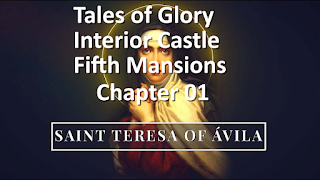 Tales of Glory dives into Santa Teresa of Avila's Fifth Mansions Chapter 01. We are entering the Teresan Third Water stage of mystical prayer. In this episode we are edified by Saint Teresa with her fifth mansion experiences of union with God. How does the soul know this union takes place? What is certitude of the soul? And she warns us of being on guard with these experiences from our soul and satan fabricating false union experiences. Pull up your cozy lounge chair next to the fireplace. Pour your self your favorite beverage and sit back as the Doctor of Prayer of the Catholic Church edifies us in these amazing experiences with God in our interior life.

Listen to the Podcast Episode on Anchor.fm

Here you'll find notes from content I mention in the podcast.

Notes on Fifth Mansions Chapter 01 No. 7 - the deep feeling on union

This is a supernatural state, and, however hard we try, we cannot reach it for ourselves; for it is a state in which the soul enters into peace, or rather in which the Lord gives it peace through His presence, as He did to that just man Simeon.106 In this state all the faculties are stilled. The soul, in a way which has nothing to do with the outward senses, realizes that it is now very close to its God, and that, if it were but a little closer, it would become one with Him through union. This is not because it sees Him either with its bodily or with its spiritual eyes. The just man Simeon saw no more than the glorious Infant—a poor little Child, Who, to judge from the swaddling-clothes in which He was wrapped and from the small number of the people whom He had as a retinue to take Him up to the Temple, might well have been the son of these poor people rather than the Son of his Heavenly Father. But the Child Himself revealed to him Who He was. Just so, though less clearly, does the soul know Who He is. It cannot understand how it knows Him, yet it sees that it is in the Kingdom (or at least is near to the King Who will give it the Kingdom), and it feels such reverence that it dares to ask nothing. It is, as it were, in a swoon, both inwardly and outwardly, so that the outward man (let me call it the “body”, and then you will understand me better) does not wish to move, but rests, like one who has almost reached the end of his journey, so that it may the better start again upon its way, with redoubled strength for its task.

The body experiences the greatest delight and the soul is conscious of a deep satisfaction. So glad is it merely to find itself near the fountain that, even before it has begun to drink, it has had its fill. There seems nothing left for it to desire. The faculties are stilled and have no wish to move, for any movement they may make appears to hinder the soul from loving God. They are not completely lost, however, since, two of them being free, they can realize in Whose Presence they are. It is the will that is in captivity now; and, if while in this state it is capable of experiencing any pain, the pain comes when it realizes that it will have to resume its liberty. The mind tries to occupy itself with only one thing, and the memory has no desire to busy itself with more: they both see that this is the one thing needful and that anything else will unsettle them. Persons in this state prefer the body to remain motionless, for otherwise their peace would be destroyed: for this reason they dare not stir. Speaking is a distress to them: they will spend a whole hour on a single repetition of the Paternoster. They are so close to God that they know they can make themselves understood by signs. They are in the palace, near to their King, and they see that He is already beginning to give them His Kingdom on earth. Sometimes tears come to their eyes, but they weep very gently and quite without distress: their whole desire is the hallowing of this name. They seem not to be in the world, and have no wish to see or hear anything but their God; nothing distresses them, nor does it seem that anything can possibly do so. In short, for as long as this state lasts, they are so overwhelmed and absorbed by the joy and delight which they experience that they can think of nothing else to wish for, and will gladly say with Saint Peter: “Lord, let us make here three mansions.”

21. He who begins is in need of instruction, whereby he may ascertain what profits him most. For this end 99it is very necessary he should have a director, who ought to be a person of experience; for if he be not, he will make many mistakes, and direct a soul without understanding its ways, or suffering it to understand them itself; for such a soul, knowing that obedience to a director is highly meritorious, dares not transgress the commandments it receives. I have met with souls cramped and tormented, because he who directed them had no experience: that made me sorry for them. Some of them knew not what to do with themselves; for directors who do not understand the spirit of their penitents afflict them soul and body, and hinder their progress.195

22. One person I had to do with had been kept by her director for eight years, as it were, in prison; he would not allow her to quit the subject of self-knowledge; and yet our Lord had already raised her to the prayer of quiet; so she had much to suffer.

Notes on Fifth Mansions Chapter 01 No. 10 The Canticles - the Song of Songs

Thank you for tuning in! We're moving through the mansions, and next time we enter into the Fifth Mansions - Chapter 2!

If you like the podcast, be sure and give us a thumbs up on your listening platform. Help get the message out on Tales of Glory! Also, if you would like to bless the ministry, and help us keep the light on in the M16 bunker, go to the donation button on the right hand side of this blog page.

Posted by Michael Norton at 5:55 PM